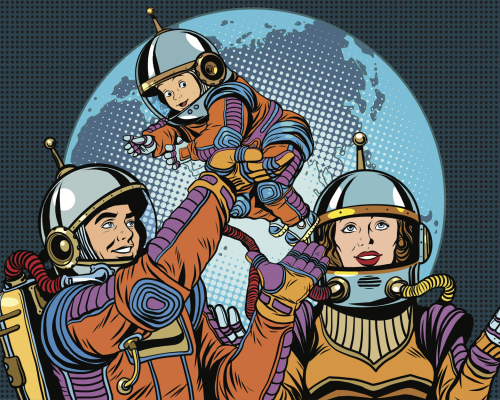 Star(t) Trek: How To Get Children Interested in Science Fiction

Sometime last month, a colleague said he wanted to introduce his young child to science fiction—specifically, Star Trek: The Original Series—and wanted to know what episodes would be good to start with. Within minutes, I provided a list of classic Star Trek episodes that were both child-friendly and compelling examples of what made the show so legendary.*

The request reminded me of the time I showed my 11 year-old son 2001: A Space Odyssey. He had asked to see the movie and, since it’s a classic, I was willing to give it a go. While the film is undeniably brilliant and epic in scope, I was concerned that the film’s pace would be a deal breaker. But the funny thing was, after a few moments of settling into the tone and glacial tempo of the nearly three-hour 1968 film, my son was totally into it. So the worry that something is “old” and that children could possibly be bored shouldn’t put parents off: a strong story and compelling artistic viewpoint is always a strong story and compelling artistic viewpoint!

There is also another important aspect to “classic” science fiction beyond mere entertainment. Much of classic sci-fi was optimistic about the future, unlike the dystopias today’s children are being fed in most media. In my opinion, dystopia is a cop-out: a dire symptom of a dangerous lack of vision. Today’s children will need to grapple with the very real challenges of the world they inherit. And in addition to curiosity, collaboration, and critical thinking, they will need the one thing that’s most important of all: hope.

The key is to select movies, television shows and books that feature simplified themes that won’t overwhelm, confuse, or condescend. Adults should also review science fiction-related films and books before sharing;  I recall watching Goonies with my son, and quickly realized that time had mentally edited out all of the intensely crude language.

It’s a no-brainer that encouraging an active imagination in children helps to foster creativity and critical thinking. Science fiction also engenders children to be curious about the latest scientific discoveries and technological innovations: in general, the world around them. Sci-fi also allows adults to help children grapple with such frightening issues as climate change, overpopulation, super-viruses, etc. By simplifying these concepts, adults can mollify fear while helping to sow the seeds of much-needed problem-solving abilities.

Science fiction has an amazing habit of either predicting or prompting the future. By stirring a child’s imagination, classic science fiction provides children with the tools they’ll need for building a future where they can thrive. See my list of age-appropriate recommendations below.

Honey, I Shrunk the Kids

Mrs. Frisby and the Rats of NIMH

Close Encounters of the Third Kind

Star Wars: The Empire Strikes Back

Star Wars: The Return of the Jedi

The Day the Earth Stood Still

Back to the Future

A Wrinkle in Time

A Wizard of Earthsea

Children of Blood and Bone

Hitchhiker’s Guide to the Galaxy

Do Androids Dream of Electric Sheep?

* In general, I would rank the initial three seasons of ST: TOS in the following way: Best: Season 2, Really Good: Season 1, and Needs Work: Season 3. Season 1 has some wonderfully written episodes based on intriguing scenarios, but Season 2 is where the cast was really "owning" their characters. Season 3 has some good episodes, but got pretty silly at times. My favorite episodes are "The Doomsday Machine" (it feels like a mini action movie), "City on the Edge of Forever", "The Enterprise Incident", "Amok Time", "Balance of Terror", "Devil in the Dark", "Arena", "Journey to Babel", "Space Seed", "The Tholian Web", "A Piece of the Action", "Mirror Mirror" (only after seeing a few other episodes since this particular episode deals with evil doppelgangers), and "The Trouble with Tribbles". "Tribbles" is known as "the funny episode" but it's probably more amusing after you've gotten to know the characters more, as the humor is rooted in their unique personalities.