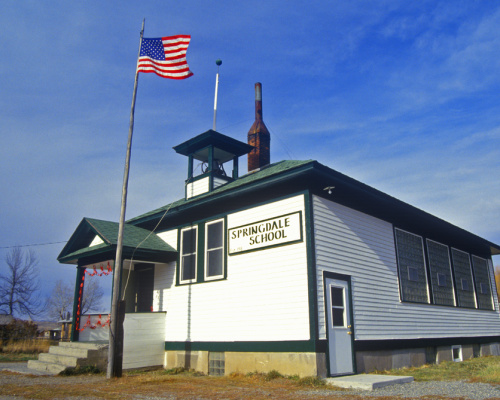 The one-room schoolhouse has become a quaint symbol of our country’s pioneer past. But while most American school districts have undergone dramatic growth as they enter the 21st Century, there are still many districts in small rural communities that are—in true pioneer spirit—doing what they can with what they have.

More than half of the nation’s school districts are located in rural areas with one-fifth of all public school children enrolled in rural schools served by nearly 740,000 rural schoolteachers (23 percent of the nation’s public school workforce). These communities often serve relatively isolated groups (such as Appalachian Whites in the Southeast and American Indians in the Northwest, for instance).

According to a November 2011 report by the U.S. Department of Commerce, 57 percent of rural households had broadband Internet access, compared to 72 percent in urban areas, which can reinforce a feeling of geographic and societal seclusion. In terms of education, though, it is vital that our nation’s rural schools possess modern technology and reliable connectivity so that students have the same access to rich learning resources as urban communities. Technology can very well give isolated communities a sense of “connection” with the outside world and the opportunities it offers.

Small districts and communities tend to have small budgets, making modern and reliable district-wide technology initiatives a challenge for many of these regions. Rising poverty rates and dwindling social services plague some rural communities. And many educators may look for opportunities elsewhere, diminishing a district’s talent pool. In fact, according to a report by the National Center for Education Statistics in 1995, schools with fewer than 300 students had higher teacher turnover rates than those with 300 students or more. This makes professional development in rural schools crucial to both recruitment and the retaining of high-quality teachers, especially considering the impact a teacher’s absence can have on a small classroom with limited resources.

Rural school districts must also contend with a lack of information in addition to lack of resources. Crucial information could reveal previously unforeseen opportunities such as grants, financial aid and college admissions insights. Technology can, again, help to disseminate this information to otherwise isolated school districts. Access to social media can also facilitate connections between students and institutions of higher learning (such as admissions representatives) as well as like-minded peers who can offer their own insights and advice.

While rural students tend to graduate from high school at a higher rate, they tend to enroll in postsecondary education at a rate that is 6 percent lower than the national average and 8 percent lower than urban students, according to The Golden Cage of Rural College Access: How Higher Education Can Respond to the Rural Life, (McDonough, P. M., Gildersleeve, R. E., & Jarsky, K. M., 2010). Much of this is due to poorly funded and resourced public schools, which—unfortunately—negatively impacts technological availability and familiarity. Even if modern technology is available, often times the infrastructure isn’t in place to truly support 21st Century learning.

Distance education and rural communities have a long relationship, going back to correspondence instruction. Broadband technology and instant messaging are the latest manifestation of distance education, and have the potential to provide remote communities with unparalleled access to almost limitless educational resources. And these methods are often at least as effective as traditional classroom teaching. Luckily, a number of state and federal entities are focusing on the needs of rural school districts.

• In 2010, the American Recovery and Reinvestment Act provided $53 billion to support the ability of rural communities to gain access to the health care, educational, economic, and infrastructure development resources.  In the words of the Department of Education: “rural communities often lack the resources needed to provide students with the academic tools and professional support needed for a 21st century education. Under the Blueprint for Reform, a revision of the Elementary and Secondary Education Act (ESEA), we’re proposing to maintain formula funding to support rural school districts while increasing funds and flexibility in competitive grant programs by giving priority to rural initiatives and simplifying their application process.”

• The US Department of Education announced its next round of Race to the Top funding recipients at the end of 2013. Ninety-one million dollars will go to four rural districts in South Carolina, Mississippi, Kentucky, Arkansas, and the Houston Independent School District. Funding will be used for several initiatives, including project-based learning initiatives, expanded web-based digital content, personalized learning academies, expanded distance learning, improved technology training, and one-to-one tech programs.

• Google recently conducted an experiment—Project Loon—to deliver Internet to rural Brazilian schools using—of all things—hot air balloons. According to Wired magazine, the balloons were able to deliver signals at speeds fast enough for these schools to access Wikipedia and conduct Google searches. Google maintains that the balloons can typically fly for 75 days and deliver connections as fast as 5 Mbps to mobile devices. A new ruling from a judge at the National Transportation Safety Board could pave the way for Project Loon to provide Internet access in rural America.

Here is what some other states are doing to provide technology to rural schools:

The State of Rural Learning: Alaska

In 2011, the Alaska Department of Education and Early Development (EED), the University of Alaska’s Broadband Technology Opportunity Program (BTOP), and the Association of Alaska School Boards (AASB) each received funding to help provide robust digital education resources for rural Alaska’s students and teachers.

For instance, the EED is working with Bridging the eSkill Gap in Alaska to develop and populate Alaska’s Digital Sandbox—a repository of grade- and subject-level materials (including fully developed units and lesson plans)—in hopes of providing robust teaching materials to remote communities across Alaska.

The State of Rural Learning: California

The Lindsay Unified School District is located in California’s Central Valley, serving 4,100 K-12 students, all of whom qualify for free and reduced lunch and 52% English language learners.

In 2009, only 25% of students were proficient in reading and only 28% in math. So the district decided to, basically, start over with an all-out redesign. They began by outlining how students learn best, and grew out from there. Today, students are called “learners.” When learners walk into their classroom, they check a matrix chart that displays the learning standards they’ve mastered. Next they consult a capacity matrix that shows content standards along with a list of “evidence.” Evidence can include assignments such as projects that learners must show to their teacher (AKA “learning facilitator”) to demonstrate they are ready to take the assessment.  Assessments are taken on Educate: a digital assessment tool and Student Information System.

Teachers are continually grouping and regrouping learners in their classrooms based on where they are in relation to “teacher pace.” Those falling behind receive one-on-one meetings while those that are experiencing no obstacles can continue.

Administrators and learning facilitators spend at least 15 hours each week looking through the data, determining whether students should be regrouped according to their levels.

Since 2009, the district has seen a 9% increase in the number of grade 2-11 students rated “proficient” in English language arts, a 4% increase in math, and 14% rise in science.

The State of Rural Learning: Colorado

Colorado’s Edison School district consists of two schools, located an hour east of Colorado Springs in Yoder. According to Principal Rachel Paul, 25 to 30 percent of the 120 K-12 students don’t have Internet access at home, with three-quarters of eligible for free- or reduced-priced lunch. To help support the district’s students, Edison ensures that there are as many computers as there are students.

Edison has a fully online school that enrolls about 100 other students in the district and has used distance-learning equipment to take field trips to NASA, learn about the Civil War, watch educational videos from the Khan Academy, learn Spanish with Rosetta Stone, and even learn the basic coding behind video games.

The State of Rural Learning: Nebraska

Over a third of Nebraska’s counties have a population of less than 5,000 people; with two-thirds of the counties have a population of less than 10,000. The Institute of Agriculture & Natural Resources (IANR) at the University of Nebraska generates over 35 distance education credit courses statewide as well as a number of non-credit offerings in agriculture, natural resources and human resources and family sciences. IANR's statewide infrastructure supports teaching, research and extension.

It is important for the University and IANR to have good access to the Internet; and while the research and extension centers have T1 connectivity, over 50 locations have dial-up access, with the remaining sites connected through a 56K Frame Relay service.

In 1999, the Raleigh-Durham area of North Carolina was considered one of the top 10 most “connected” areas in the U.S., according to Headcount.com. This connectivity, however, has not reached the more rural areas of the state due to the cost of providing services in remote areas and generally lower Internet usage rates in low-income families.

To help connect these areas, the North Carolina Cooperative Extension Service provides Internet to county and state government agencies through 56 Kbps lines to each local office and T1 lines to remote research centers.

The State of Rural Learning: Ohio

One particularly depressing side effect of remote, unconnected communities is that many rural students have low academic and career expectations. Technology can help students break-free of this limiting mindset so that these students—no matter where they live—can realize their full potential. Personalized learning techniques can help inspire rural students and open their minds to what is possible. These instructional methods coax students to explore content outside the traditional curriculum, circumventing limitations while both broadening and deepening learning. And this change could—in the long run—help these communities overcome other common rural obstacles such as poverty and substance abuse.

It is clear that technology can help bridge the distance between remote communities and robust resources. In fact, a small, close-knit community with responsive and attentive educators empowered by technology could bring about dynamic academic change. Sure, they must rely on ingenuity and resource optimization, but with planning and purpose, most any hurdle can be overcome.