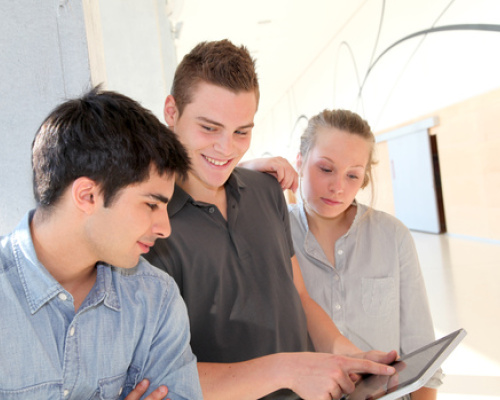 A Day in the Life of a Personalized Learner

8:00—Richard wakes up to an alarm from his smartphone charging next to his bed and checks his reminders. He notes that he has an English project due in two days and that he needs to check with his friend Chris in his science class today about their genetics’ experiment.

8:30—Before catching the school bus, Richard watches a video his math teacher made about functions. He’s a little confused, so he stops it in the middle and starts it over again. Richard is still not sure he understands, so he reads the URL of a tutorial that his teacher recommends for more help into the Evernote app on his phone to check out later.

9:00—Richard’s math teacher has flipped her classroom so now Richard is working with a small group on a project illustrating non-linear functions. They have decided to do an animated presentation and have used Google Tasks to set up a project plan. Richard is good with technology, so he’s working on taking the script the group created and putting it into the presentation. Another classmate, Clarissa, wants to learn how to use the app, so she’s helping him.

10:00—In social studies, Richard participates in a small group discussion on current events. He was responsible for reading the news for that day and developing some good discussion questions for his group to talk about. They summarize their thoughts in an online document and then read and respond to the discussions of the other groups in the class.

11:00—Richard’s science class is having a videoconference with a local expert on GMOs (genetically modified organisms). He and his classmates have been researching the topic and have prepared questions they would like the expert to answer.

12:00—At lunch, Richard checks his phone for messages and reminders and sees that he needs to talk to Chris about their science project, so he texts him to meet him in the lunchroom. They text the rest of their group and hold an impromptu meeting to set up a time to work on their project.

1:00—After lunch in English class, Richard picks up reading A Wrinkle in Timeon his phone from where he left off last night on his tablet. His group chose that book to read to meet the Craft and Structure Common Core State Standards. As his teacher has assigned, Richard inserts questions and predictions into the e-reader to use later when his group creates their project on the book.

2:00—Richard gets a little break from technology in his P.E. class where they are in the middle of a basketball unit. Today while they play a game, his teacher is recording their movement on the court to assess with a rubric the teacher distributed earlier. Later in the week, Richard will log in to his Google account to get a document with the video embedded and the rubric with his score and the teacher’s comments. This assessment lets him know what he needs to work on to get that “A” he wants!

3:00—After school, Richard has a science club meeting where they’re planning an activity for next month. They create an online survey with SurveyMonkey and send it out to all the club members to see what they would like to do.

4:00—When Richard gets home, he relaxes for a while and plays a little basketball in the driveway with his younger brother. When they get tired and hungry, they go in for a rest and a snack.

5:00—Before dinner, Richard logs on to his computer to play Minecraft for a while. He checks a discussion forum that he likes to visit about Minecraft and reads a question from another player. He makes a short video explaining how to do what the player wants to do and posts it. He immediately gets a thank-you response.

7:00—After dinner, Richard checks out the tutorial on functions that he noted that morning and feels like he gets it a little better now, and he works for a while on the math project.

9:00—Before bed, he uses Snapchat to send a friend a funny photo he took of his dog. They have a short conversation about a movie they want to see over the weekend. They make a date to see it on Saturday if one of their parents can take them.