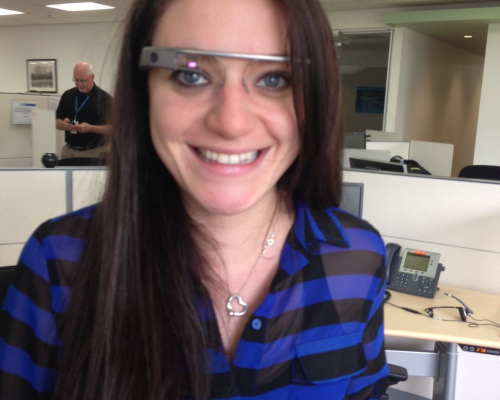 Wearing Your Tech on Your Sleeve...or Wherever

Wearables devices are—in a nutshell—most any technology that one can wear. They might gather and store data that can be transferred later to other devices, or may simply provide information, such as messages or information based on the user’s location. Some devices are complex, multifunction systems, while others focus on a narrower range of purpose with a limited set of features, like devices that help with fitness goals.

According to a study by the International Data Corporation, approximately 111.9 million wearable devices will be sold in the year 2018. IDC accounts this growth to devices such as Pebble, Galaxy Gear, and Sony’s Smartwatch that have “taken a giant step forward.” The IDC cites “complex accessories”— devices such as the Fitbit and Nike+ FuelBand that require a second device, such as a smartphone—as other future market leaders.  This optimistic forecast comes with a caveat, however, that the value proposition of these wearable devices “has yet to be completely clarified.”

Recently Google announced Android Wear— an operating system which turns Android into an ultra-simple OS for watches— with a set of partner-manufactured smartwatches are being planned for the masses.  And, of course, Apple have long been rumored to be developing some sort of  “iWatch.”

But all of this development in search of a value proposition begs the question: is wearable tech simply a case of the Emperor’s New Clothes?

The human wrist has long been a venue for flaunting style and status, so it’s no surprise that wearable technology has been looking to occupy this space. But— that said—what opportunity is there to be had with wrist-tech in this post-watch era? Rings, necklaces, earrings, belt buckles…the list of possible wearable real estate is endless.  But it will be a device’s potential usability, not wearability, that decides what technology we put on, and what technology puts us off.

The most conspicuous and controversial contender in the wearable device space has been, without a doubt, Google Glass. Amongst its many features, these goggles allow the user to attain navigation views via built-in GPS to plot their position on a map as well as take pictures and video. They can also, when integrated with a smartphone, allow users to answer calls and see text messages and notifications.

Google Glass is a powerful example of a technology where an influential company can spur masses of apps before a real market for that specific device even truly exists. Google Glass is also an example of how divisive technology can be, especially if that device is literally in people’s faces.

Google dubs the device’s field testers as Explorers, while others have saddled these testers with the unenviable sobriquet of “Glass Holes.” In fact, there has been a significant backlash to early Glass adopters due to potential privacy issues, an “elitist” perception that the $1,500 device can convey, and just a perceived overall “creepiness” that many feel when witnessing the devices in action.

But regardless if you feel that Google Glass is—as one critic referred to them as “Parachute Pants for the Face”—or the first step in an inevitable and exciting hybrid of technology and lifestyle, it can be safely assumed that we will be seeing more and more of them, or similar devices, in the future.

I’ve Got You Under My Skin

While Google Glass may rub some the wrong way, Google and other companies such as Motorola are looking to weave technology even deeper into our personal lives.

Digital tattoos are a new form of technology that act something like a computerized Band-Aids. These smart patches will be able to track biometrics such as skin temperature and body movement, and even administer medication that’s absorbed through the skin. Another project considered are smart pills that, when swallowed, generate electricity from stomach acids and can transmit health data to an externally-worn device.  So soon you could have your tech and eat it too.

The implications of wearable technology in education, while only in its nascent stages, could prove considerable. At the Wexner Medical Center at Ohio State University, for example, a surgeon transmitted live video of an operation to remote students via Google Glass while collaborating with a colleague at a third location. And the Contextual Computing Group at Georgia Tech is developing a tracking device that can record the wearer’s usual daily path and provide automatic phone messages based on the wearer’s whereabouts.

In theory, wearable devices could transform education. Wearable cameras, for instance, could help students to better observe, engage and chronicle any number of learning environments. Students could wear devices that hear, parse and identify sounds, such as animal noises on field trips, or utilize devices that enhance vision for scientific study while capturing photos and video. Or they could simply be wearable devices that enhance visitor appreciation of parks, wildlife and national landmarks with relevant information and media.  Devices equipped with sensors, processors, and information displays could help students to better engage in the world around them, as well as offer real-time assistance and enhanced awareness to those with certain physical disabilities.

For teachers, wearable computing devices can provide more data and insight into student learning, helping educators to offer more timely and relevant support measures. They could also provide support and learning materials without the need for human intervention.

But just as wearable tech seems poised to become the latest fashion, it may already be going out of fashion…at least at this early stage in the game.

According to research from Endeavour Partners, one-third of American consumers who have owned a wearable product stopped using it within six months. And fitness trackers—a wearable technology that took an early market lead thanks to early adopters—are showing signs of exhaustion, with half of users no longer using them. There have also been a glut of Galaxy Gear smartwatches appearing on eBay, only months after launch.

But perhaps that ultimate, game changing wearable simply has not been invented yet. Consumers, for the most part, need a practical reason to adopt: the device must not only be “cool” and stylish, but either simplify or transform an existing function.

Intel are hoping to provide relevant wearables by directly soliciting the public at large. Intel’s Make It Wearable initiative is a contest accepting wearable technology concepts from all over the world. Entrants provide short video pitches and proposals of their inventions for a chance to win cash prizes as well as mentorship to see their ideas developed. By allowing a greater diversity of ideas, this type of approach could yield something truly surprising.

We are only experiencing the first wave of what will undoubtedly be a deluge of devices. And, in Darwinian fashion, only the fittest Fitbit will survive. And that new can’t-live-without device that we never knew we needed might be just around the corner—ready to wear— at the corner of Fashion and Function.