When the last National Education Technology Plan (NETP) was released in 2010, the edtech landscape was vastly different. The first chromebooks hadn’t been released, 1:1 classrooms, much less schools, were few and far between, and the number of web-based tools and resources was a fraction of what is available today. The recently released 2016 NETP, titled Future Ready Learning: Reimagining the Role of Technology in Education, reflects on progress made and looming challenges ahead, while articulating a clear vision for the future. As the digital transformation of our schools has matured, so too has the new plan.

A focus on equity

One of the aspects of the 2016 NETP that I most appreciate is the repeated attention given to equity, especially since the theme was almost entirely left out the 2010 plan. The word equity was mentioned just twice in the 2010 NETP. Technology can help close achievement gaps and remove barriers if, and only if, every student across the country has equal access to technology regardless their race, socio-economic status, location, or other factor.

But the report notes the presence of more than just a digital divide between students who have access to devices and those that do not. The plan calls attention to what it refers to as the digital use divide. Many students grow up using technology at school and at home in passive ways to consume media. Others use technology in a much more active, participatory manner: collaborating with peers, interacting with experts, and creating their own media. Students who use technology in these active ways will have a better chance of being successful in school and preparing for their future careers and lives.

The addition of leadership

As in past plans, the 2016 plan is organized into sections, each offering recommendations towards meeting a goal. While these sections and their associated goals remain largely the same as in the previous plan, there is one notable change: the addition of leadership. The 2016 plan acknowledges, “Taking full advantage of technology to transform learning requires strong leadership capable of creating a shared vision of which all members of the community feel a part.”

Leaders are instrumental in creating a supportive culture centered around a common goal by empowering teachers and modeling the change they want to foster. When such a culture is established, educators will be supported in trying new things and taking risks outside of their traditional comfort zones.

Yes, you can download the lengthy PDF, but the report is much more manageable when explored through a web browser in bite-sized chunks. In just a few short minutes, my one browser tab had multiplied into many more. The plan started numerous tangential explorations, including learning about  programs like Cities of LRNG, games like Filament Learning’s Life Science Suite, and courses like the Exploratorium’s Tinkering Fundamentals.

More impressive than the new links to outside resources filling up my bookmark bar are the concrete examples presented through the entire plan. These examples show how different stakeholders—from state education departments all the way down to individual teachers and students—embody the vision presented in the plan, showing how it can become a reality. Embedded YouTube videos from the Office of Education Technology’s Future Ready series bring many of these stories to life.

The NETP is also more visual than in years past. Infographics, like the one below, help explain the structure of the plan as well as some of its most important messages and terms. 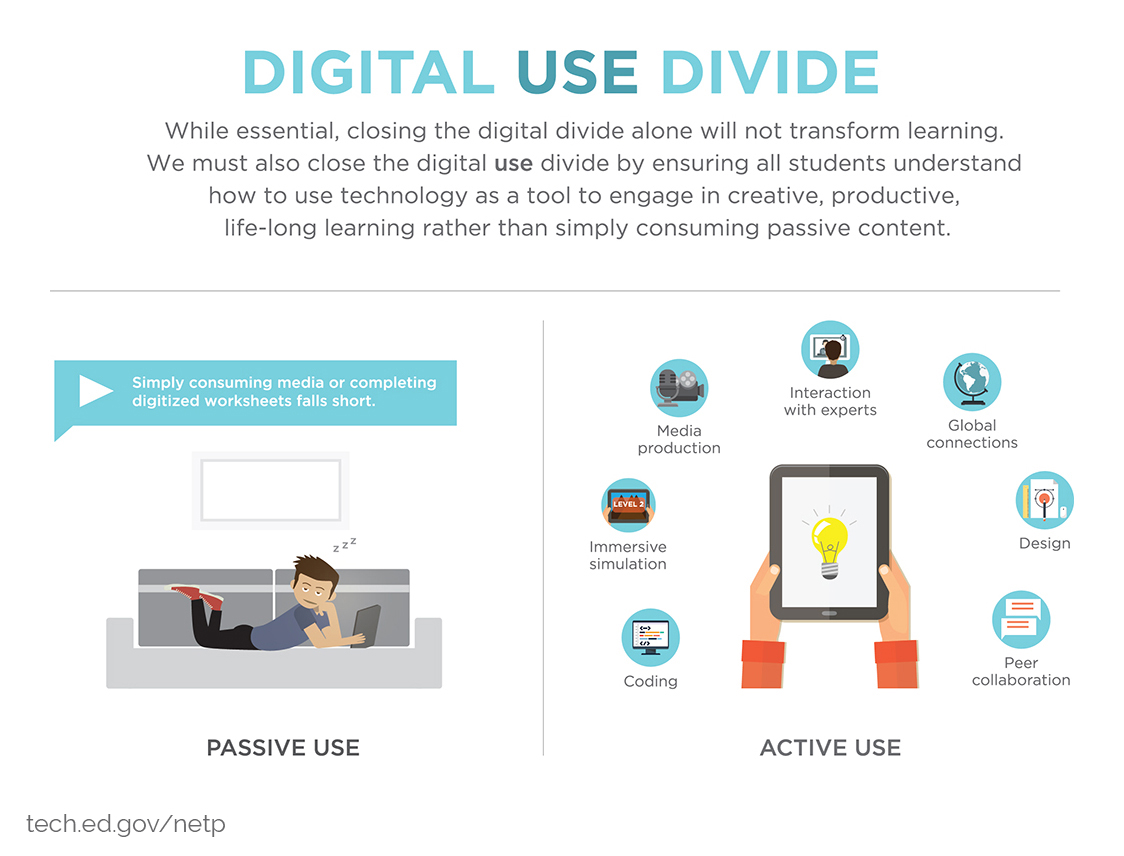 The 2016 NETP celebrates progress made since the publication of the last plan in 2010. Some landmarks that resonated with me included:

At the same time, the plan acknowledges that many issues still need to be addressed, including:

At points, the NETP seems to stray a bit from its practicality. For example, one infrastructure recommendation reads, “Ensure that every student and educator has at least one Internet access device….for use in and out of school.” At this point, 1:1 devices for all students in K-12 still seems like a distant goal. But given the progress made since the last plan, maybe by the time the next NETP is released in another six years, the idea will be a reality.