A series of New York Times articles this fall gave me pause.

They were filled with views about how children’s technology use is shifting in Silicon Valley, where so much of our technology originates. A dark consensus is growing that screens—in any form—are bad for children. The digital gap no longer divides rich students with access to technology from poor students without; now the wealthy send their children to device-free schools while the average public school is still rushing to put an iPad or Chromebook in the hands of every student. Some families are even going so far as to prohibit nannies from using their phones.

As someone who works in education technology, these articles challenged some of my core beliefs.

If technology isn’t good enough for the children of the people who created it, how can we defend its use in schools, especially with young children?

To me, the sweet spot for technology use lies somewhere in between the two extremes of “absolutely none” or “far too much”. To find this perfect Goldilocks ratio, we should focus less on how much children use devices and focus more on how we ask students to use them. In a joint position statement, the National Association of Education and Young Children (NAEYC) and the Fred Rogers Institute state: “When used intentionally and appropriately, technology and interactive media are effective tools to support learning and development.”

What kind of interaction meets this threshold for reaping positive benefits of technology in the classroom? A recent experience in my son’s second grade math classroom provided some insight.

The second graders had been using physical pattern shapes to support learning in many a study of geometry. These explorations gave students an initial understanding grounded in concrete physical manipulatives.

To support learning, I visited the class and introduced students to the Pattern Shapes app (built by Clarity Innovations for the Math Learning Center) on Chromebooks. Using the app as opposed to the physical blocks transitioned students to the representational stage of understanding.

First, we filled in a turtle outline using the fewest possible pattern shapes. Students found multiple ways to fill in the outline with just twelve shapes. Next, we explored the area of the turtle in terms of equilateral triangles. Again, students showed their work in a variety of ways, some that I’ve never seen before. To share their work, they carried their Chromebooks to the front of the room and put the screen under the document camera. It wasn’t elegant, but pattern shapes on a screen are more transportable than pattern shapes on a desk! 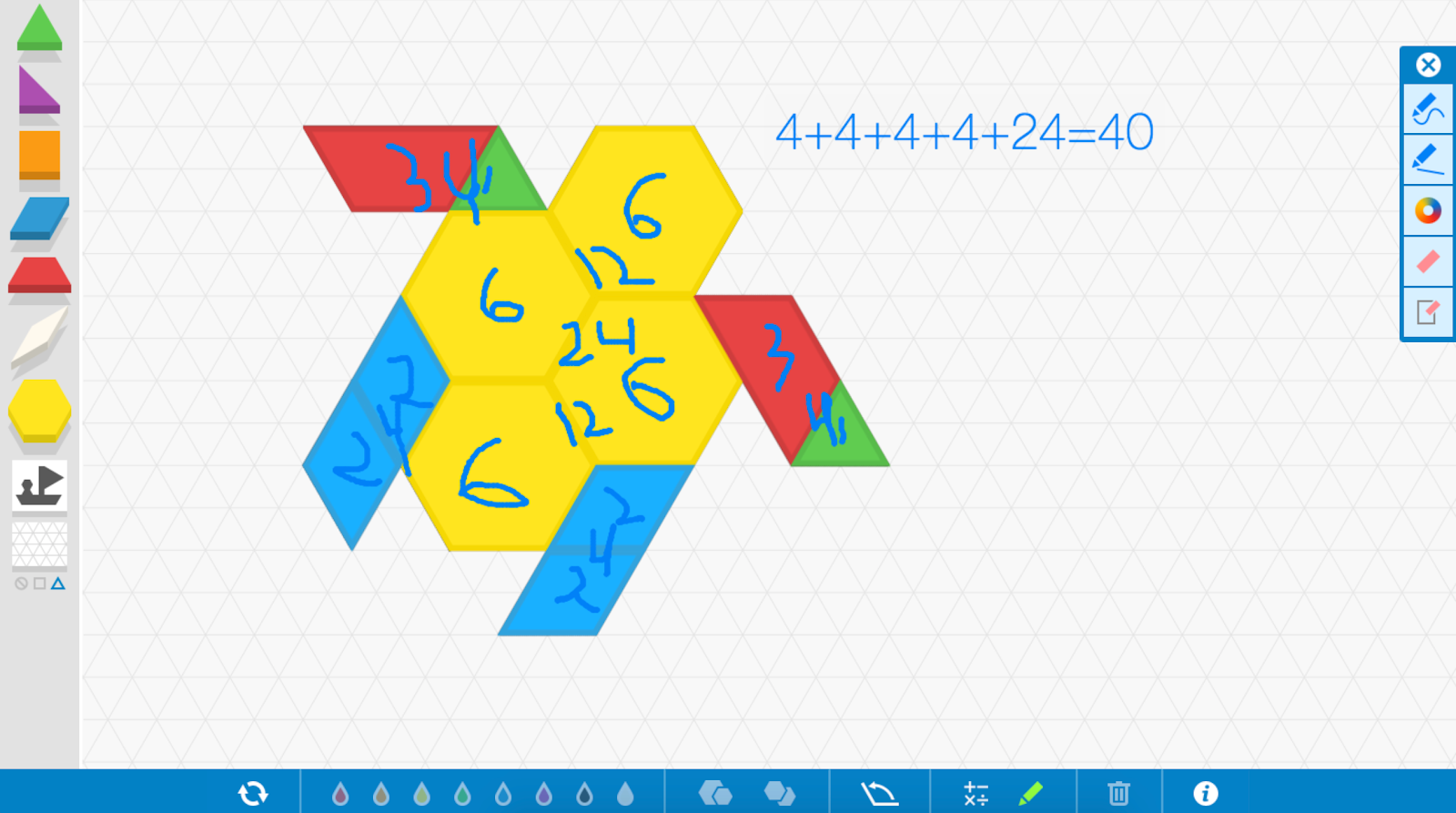 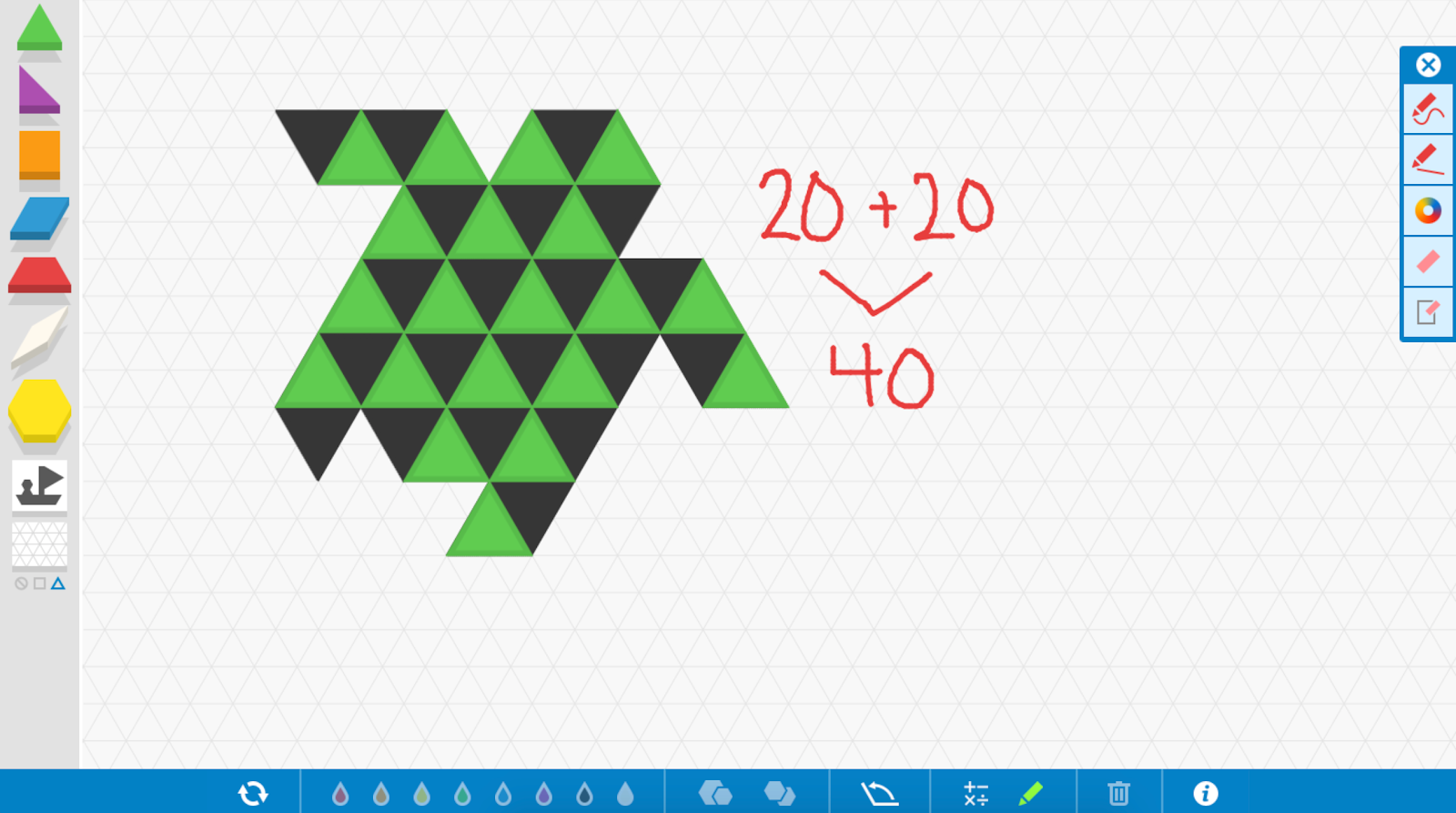 Screens weren’t the focus of the activity. Instead, they were a tool for engaging in math practices and developing understanding. As students transitioned to finding area with rhombuses, we paused to share thinking and make predictions. One student said that because “two triangles fit in one rhombus, the area [of the turtle] would be 80 rhombuses.” This put another student on the right track. She suggested, “One is half of 2. If the area is 40 triangles, then it has to be half of that for rhombuses, 20.” 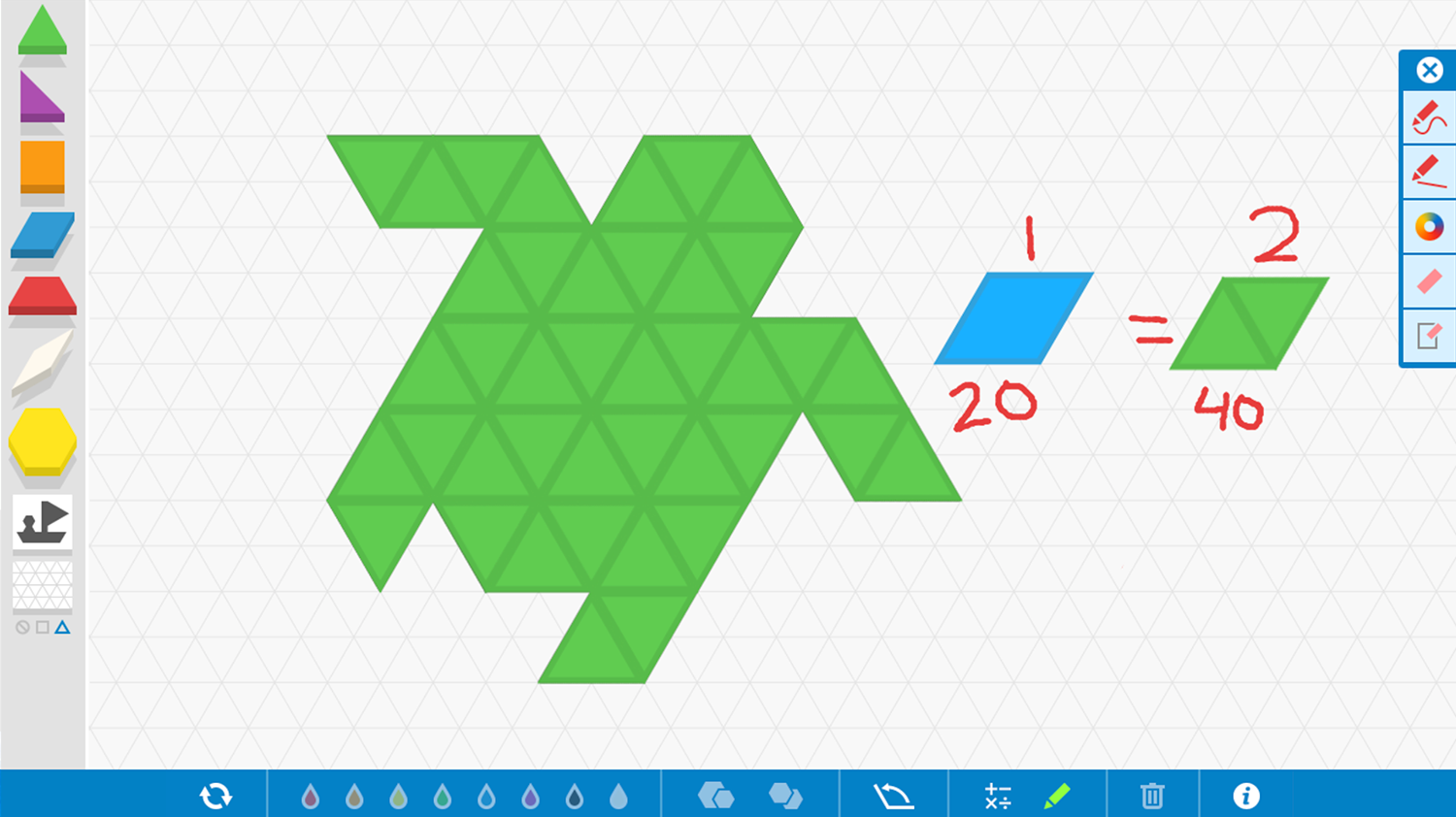 Students wrapped up the activity by making (and finding) the area of their own outlines that they could share with peers and playing Last Shape In Wins beyond the large hexagon.

The Pattern Shapes app offered a few advantages, including:

• Unlimited pattern shapes with no setup or cleanup

• A pen and equation editor to show student thinking

• The ability for students to create their own custom outlines

Most importantly, in a little under an hour, students became fluent with a new age-appropriate, open-ended tool for exploring math that they can use in and out of school.

I believe that we must acknowledge the dangers of technology in our schools. Yes, data security and privacy is scary. Yes, technology—including individualized learning software—can be isolating. Yes, technology (by itself) should never replace teacher-led, collaborative classroom learning.

However, by recognizing its dangers, we can cautiously identify an appropriate role for technology in education, even in our youngest grades. Technology is a fixture in our modern society, both in the workplace and in our everyday lives. In school, I believe it is essential for us to model responsible and intentional technology use and provide opportunities for students to practice using technology actively and creatively as a tool to support their learning.