This year, my 13-year old daughter has attended four birthday parties at escape rooms. Not familiar with escape rooms? It’s all about puzzles, codes, locks, and secret messages to get out of a room within an hour. The rooms are themed, where players enter a windowless alternate place, immersing themselves in wizardry, secret societies, or a Cold War era lab, for example. To escape requires critical thinking, logic, observation, collaboration, creativity, and a bit of luck. At a cost of about $30 per person and a limit of 8-12 people per room, as fun as it would be, this is not a realistic option for a field trip.

However, there’s another option—Breakout EDU. Have you heard of it? Essentially, it’s an escape room in a box. Sinec You can order a Breakout EDU box or since it's open source, put your own together by purchasing the materials from your local hardware store or Amazon. The box contains locks of all types, an invisible ink pen, a UV light, a smaller lockbox, and a hasp. Games with all the clues and instructions can be accessed from Breakout EDU or developed by teachers using an open source template. 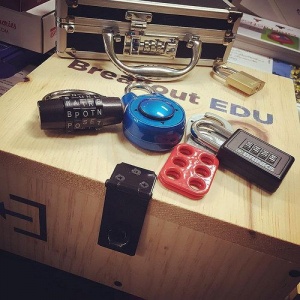 The nearly 300 available lessons and puzzles range from games centered on children’s stories to being trapped in a world of Minecraft, to math puzzles. There are games for all ages and all disciplines! Even your 90-year old grandma might enjoy a challenge! New games are being released continuously. Breakout EDU is a true “think-outside-the-box” experience.

“It is more of an interesting way to review than just worksheets. There is always sort of a back story and I was thinking a carnival where we could have the polynomials being the roller coasters and the Ferris wheel being the sine graphs and doing a lot of math problems within that.”

“Basking in the awe of her peers, one girl beamed with pride when she realized the map on the wall was the key to the four-digit lock. Others teamed up to decode a phrase, leading them to a hidden key. Then they used a UV flashlight to find clues to the letters of the word lock. Finally, our students deciphered text which helped them unlock the directional lock. The kids were questioning, thinking and focusing, solving the puzzle and “breaking out”—all with just under 30 minutes to go on the clock! Excitedly, they asked “When can we do it again?” Read more.

Instead of family football this year, how about trying Breakout EDU after your Thanksgiving  meal? For a treat, check out the The Case of the Pilfered Pie.

Watch the Breakout Edu video for a video overview.

More information about Breakout EDU is available at:

Stefanie Hausman is a Learning Experience Designer at Clarity Innovations, where she creates online tools and resources for K-12 educators. Stefanie has worked in education for more than twenty years. She has had varied teaching, teacher training, and curriculum development experiences in the United States and internationally.