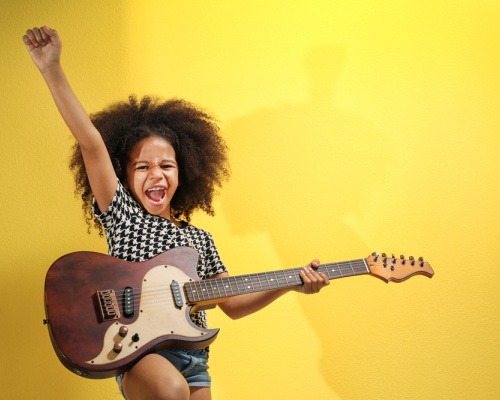 Art, meditation, and yoga have all been associated with strengthening the brain and helping children to focus. But music—the unofficial soundtrack to our lives—has perhaps the greatest potential to wire young minds for cognitive success, at least according to a recent study conducted by the University of Southern California.

Dr. Assal Habibi is a research scientist at the Brain and Creativity Institute at University of Southern California, as well as a classically trained pianist with many years of musical teaching experience with children. Her expertise is in utilizing electrophysiological and neuroimaging methods to investigate human brain function.

Habibi is leading a five-year longitudinal study investigating the effects of early childhood music training on the development of brain function and structure. The study—which also gauges cognitive, emotional, and social development—is a collaboration between USC and the Los Angeles Philharmonic and their Youth Orchestra program at the Heart of Los Angeles (YOLA at HOLA).

Thirty-seven under-privileged children between ages 6-7 were enrolled at the onset of the study in 2012: the first group was about to begin a free community-based music program at YOLA at HOLA where they would learn to play instruments, such as the violin, in ensembles and groups. The second group of children was set to begin a sports training program and was not engaged in music training. The third group was comprised of children from public schools and community centers in the Los Angeles area who were not involved in any specific after-school programs.

Meeting with the children annually for testing periods lasting between 2-3 days, Habibi and her team used neuroimaging, neurophysiological and psychological methods to measure brain activity as well as cognitive and social development.

Initially, the children who had not yet begun music training were found to be not so different from the children in the other two groups in terms of cognitive, language, socio-emotional or brain development. During the course of the study, however, the musically trained children exhibited an accelerated maturation of the brain’s auditory pathway: the means by which our ear connects to our brain to process sound.

One task involved how successfully children could detect whether specific melody pairs were different and the corresponding brain responses to these occasional differences. After two years, all three groups could identify when the melodies were the same, yet the children who had undergone music training were more accurate at detecting changes in pitch when the melodies were different.

These preliminary results suggest that music training during childhood, even for a period as brief as two years, can accelerate brain development: particularly in the areas of the brain responsible for processing sound, language development, speech perception and reading skills.

“The auditory system is stimulated by music,” Habibi says. “This system is also engaged in general sound processing that is fundamental to language development, reading skills and successful communication.”

Another study suggests that informal music-making with young children may have benefits above and beyond even those of shared book reading. A University of Queensland team studied more than 3,000 children to gauge the associations between informal home music education for very young children (ages two to three) and later cognitive and social-emotional outcomes.

The team found that music games in the home can lead to increased literacy, numeracy, social skills, and attention and emotion regulation by the age of five.

What makes this study particularly interesting is that it’s based on situations where the child’s musical activities were informal and shared, typically with a parent. This means that singing, rhythm games, and kitchen cabinet jam sessions can all assist in developmental learning.

Over the past two decades, researchers have found that music training can translate to better language and mathematical skills, higher IQ and overall greater academic achievement.  Hundreds of published scientific papers have cited music therapy as a treatment for mental health issues and even chronic pain.

The USC findings, in particular, suggest that not only can music training accelerate brain development and sound processing, but it may benefit language acquisition: particularly at-risk children who may experience more difficulties with language development.

“We are broadly interested in the impact of music training on cognitive, socio-emotional and brain development of children,” says Habibi. “These results reflect that children with music training, compared with the two other comparison groups, were more accurate in processing sound.”

Three years of this study remain. But these interim results are promising. Dr. Habibi and her team will continue to follow these children to see whether music can serve them as adolescents when cognitive and emotional control is more vulnerable.

For more information on the study, visit the USC Brain and Creativity Institute.

Music Apps and Games for Children

Have fun and make simple music with common objects.

Modern, engaging intro to the fineries of classical music.

Make practice time a breeze with fun games and videos.