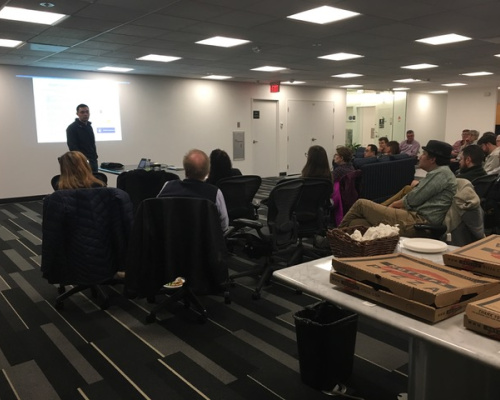 Theodore King, Co-Founder and CEO at Faria Education Group Limited, spoke with the PDX EdTech Meetup (a function of the Northwest Education Cluster, and organized by Clarity Innovations) on Designing Products for the International School Market.

Faria is blazing trails in IB (International Baccalaureate) education. Theodore himself was once an IB student, and he was frustrated by everything that he had to keep track of, since—as he discovered—so many IB school files are widely dispersed. He soon found that IBDP (International Baccalaureate Diploma Coordinators) also had issues, with the bulk of their time (it seemed) spent with administration and record keeping rather than actually teaching, with teachers often having to login to three separate systems to plan curriculum, create assessments and submit term grades for report cards.

There was no “all-in-one” solution for international schools, resulting in a hodge-podge of systems for stakeholders. Schools were either forced to make do with what is available, or—in some cases—build their own systems from scratch.

So Theodore and his friends worked tirelessly on a website that streamlined the experience for students and teachers alike: built for IB DP Coordinators with digital forms, centralizing all key IB deadlines for students.  Theodore noted that he and his team solved an actual problem, as opposed to a “wouldn’t it be cool if we built this thing and see if people like it?” scenario.

Theodore went on to explain that International schools have sustained a steady 9% compound annual growth rate since 1960, with a projected 16,000 schools by 2026. This is an incredible opportunity for LMS providers!

International schools usually start small and tend to be very stable as entities. Theodore responded to the concerns of his new clients with incredible service: if a school requested a feature, he and his team would build it in a week. It was a realization that Faria wasn’t a product company: they had to be a services company. Even if a product is “perfect,” it requires constant iteration, and people will always need responsive support to help serve them (especially busy administrators and educators!). Faria was the first provider with 24-hour global support coverage as well as complimentary phone and email support for teachers, administrators, parents and students.

Theodore also shared a tip a mentor gave him for pricing your product when you first start out: price low. If you’re under $100 for a product per year, technology directors have more flexibility with the purchasing and can often avoid the hassle of opening a purchase order.

Faria also defined itself by greatly and proactively improving its systems reliability. In fact, Faria is one of the only international education systems providers with ISO/IEC 27001:2013 Information Security Management System certification, as well as being GDPR compliant. While these data safety precautions are important for everyone, international schools are acutely aware of the demand considering they may have children of diplomats in their systems.

The PDX EdTech Meetup  is a gathering of Portland-based designers, developers, content creators, and business leaders working in the Educational Technology space. We look forward to seeing you at our next meet up!