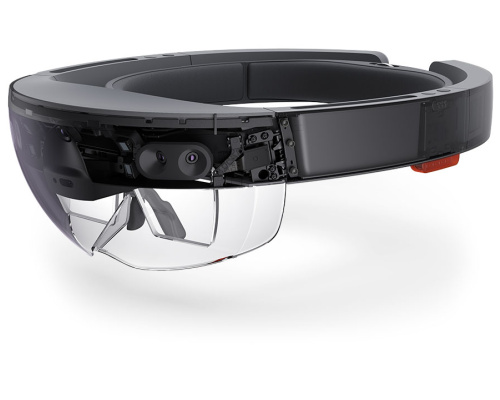 Microsoft HoloLens: The Future is Now?

Imagine a future where a teacher can speak a word or wave a finger and make any object in the world’s greatest museum collections materialize in his or her classroom. That future may come sooner than you think with Microsoft’s release of an amazing new product, HoloLens.

In brief, the HoloLens is a pair of glasses that allows the user to see digital representations of three-dimensional objects as though they are actually occupying physical space. As an example, a student could look through the HoloLens and view a life-sized Egyptian sarcophagus placed in the center of the classroom. Wearing the HoloLens, students could walk all around the sarcophagus, viewing it from any angle or direction, just as they would during a visit to the Egyptian exhibit at the Metropolitan Museum of Art.

We have had HoloLens in the Clarity Innovations office for a week or so and I have installed every app available for the HoloLens in the Windows Store (and tested most of them). Below are my first impressions...

The HoloLens provides a personal sound experience without earbuds or headphones.
The sound comes from speakers that are positioned just above the ears. This allows the wearer of the device to easily hear sound from apps, as well as sound from their environment.

The HoloLens sound is three-dimensional.
When I turn my head towards or away from holograms that have music playing, I hear the music change in volume appropriately in both ears. This adds to the sense of realism - very cool!

Holograms can look convincingly solid, and stationary.
A hologram can be placed on the floor or a tabletop, or simply floating in space. Where it’s placed, it remains, even as the viewer walks towards, away from, or all around it. And, with optimal lighting conditions, the holographic objects (or people, or landscapes) have an impressive solidity to them.

Resolution is better than expected.
I was happy with the way videos and photos looked when viewed through the HoloLens. I look forward to watching a movie on a virtual 200” flat screen!

Problems that I have encountered

Sections of wall don’t get mapped, especially if there is a shadow there.
The spatial mapping achieved by the HoloLens is very impressive, but also limited in ways that become obvious quickly. It doesn’t perceive windows as solid parts of a wall, and it creates very rough 3-D models of objects with more than a few flat surfaces.
Note: The fact that windows are not seen as solid can be a good thing, because it allows holograms to be seen through the window just as a real object would be visible.

Looking straight up doesn’t feel so good on the old honker.
The HoloLens pressed uncomfortably into my face and nose when I looked up (something I wanted to do often in the HoloTour app, for example). Maybe it’s just a matter of adjusting the headband. Or…the HoloLens is just too heavy right now to feel comfortable in all positions.

Typing is frustrating, with or without a keyboard.
Surfing the web might be enjoyable on the HoloLens, but not if you ever need to enter your username and password. Selecting one letter at a time on a keyboard floating in space is no fun at all. It is very easy to select the wrong key. Basically, the HoloLens reduces everyone to hunt-and-peck computer users.

I have connected a Bluetooth keyboard to the HoloLens, with mixed results. On an ordinary computer, I can’t type 100% accurately without occasionally looking down at the letters. Maybe if I can accomplish that without moving my head, it will be fine to use a bluetooth keyboard. Instead, I look at the keyboard and see the cursor ( a small dot) hovering over the keys - both distracting and annoying.

If I have a favorite experience on the HoloLens, the HoloTour app is it. The app utilizes 360 degree video and computer animations to immerse the viewer in another place and time. Currently, there are two options: visit Machu Picchu or Rome. Initially, I was worried that I would find it annoying to see my real surroundings and the virtual environment at the same time. Instead, it feels like dreaming with my eyes open. I’m excited to try HoloTour in various settings and light conditions to figure out how and where to get the best experience.

This may be the best place to start when demoing the HoloLens for a new user. The game creates a convincing experience of hostile robots bursting out of the walls and attacking the player. Shooting at the robots and missing results in gaping holes revealing virtual wires, insulation, and studs within the wall. Nice stress relief, virtually destroying the office!

This app has potential to be a great tool for learning about stars and planets, but it didn’t hold my attention for very long. It’s very much a work in progress, so I didn’t expect it to be as fancy as some of the other HoloLens apps. I’m excited to see new versions as the developers continue to work on it!

In this game, the player becomes a detective tasked with rescuing a kidnapped child. Characters in this game are full-sized, which makes it almost impossible to view them in their entirety without taking quite a few steps back from them. Alternatively, the player can turn his or her head sideways, changing the field of view from a wide to a tall rectangle. This makes it easier to see the entire virtual human head-to-toe, but probably shouldn’t be sustained for long periods of time.

Both Fragments and HoloTour are impressive in their ability to immerse the player in a virtual world while remaining connected to the real one. I can see great potential for the HoloLens as an educational tool, but it remains to be seen if the examples given to developers will inspire the creation of high-quality apps that serve the education audience.