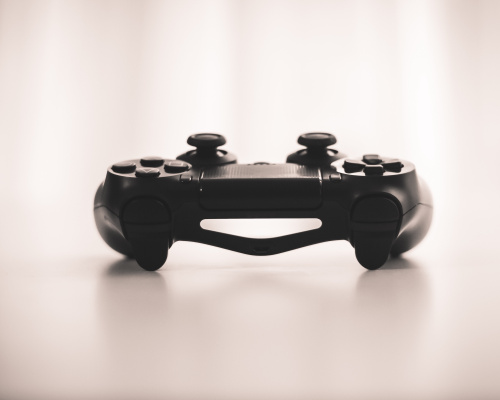 Get Gaming at the GDC Education Summit

As a part of our research into gaming and education, I attended the GDC Edsummit, the annual Game Developers Conference in San Francisco. The conference has sessions that focus on several aspects of the game development industry: Engineering, Creative, Production, Audio, Business, and Marketing. This is an industry wide event with over 26,000 in attendance this year. With lots of new tech surrounding virtual reality, "VR" was a major focus.

A major departure from using virtual reality as a gaming platform was a focus on using VR as a platform for experiences. Epic had a large pre-expo wing full of booths in there VR Lounge that showcased the Unreal Engine being used to power those experiences. Shocking experiences, such as those from paranormal activity and simulated extreme experiences from the Summit of Mount Everest to wires strung between the World Trade Center 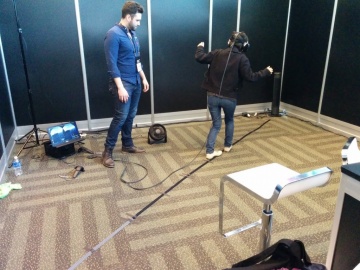 . There was an emotional VR experience called The Giant in which you observe a pair of parents attempting to distract their daughter from the armed conflict outside.

While there was a good deal of attention paid to VR devices such as Oculus Rift , Valve/HTC Vive , Sony Playstation VR , Google Cardboard , Samsung Gear VR , and Mattel Viewmaster ; there where also exciting demos of the augmented reality device, CastAR and the immersive 3D display from zSpace . Unfortunately, Microsoft didn't have any demos of the HaloLens (looks like they where waiting for their Build Conference ).

Each year, GDC puts on an Education Summit for Educators that either teach a game development course or otherwise use games in their curriculum. This year the Schedule was primarily focused on educators who teach Game Development programs or Game Focused curriculum. Topics include: Post graduation incubation , Student IP rights , Game Balance , Game Writing Curriculum , Tools for game creation , and Using Games to Teach About Game Creation . Each year GDC ends its summit with a Soap Box Panel

Many of the challenges that face educators in the field of Game Development are the same as any other industry. How to teach the fundamentals of game design while still delivering graduates that have experience using the tools of the trade. How do we attract a more diverse group of people to the game industry and keep the curriculum focused on what students need to know.

Balancing: breadth of knowledge, experience, and the tools of the trade 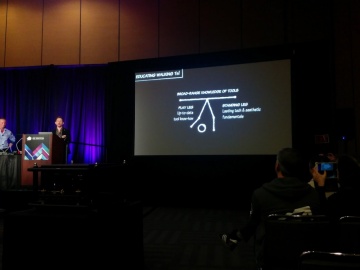 One of the major issues was (primarily in the game design) students are graduating and while they are able to balance a games rules and they can build a game using any of the major game engines: Unity, Unreal, and Twine; students are graduating and don't posses the core skills necessary to making fun and imaginative games. This was referred to as "Engine On, Head Off." When they student lets the tool make the decisions and the creative process takes a back seat.

The goal is to produce a graduate that is a "Walking T Model" who has a wide range of knowledge of tools, a standing leg of lasting tech & aesthetic fundamentals, and play leg to keep them up-to-date on the state-of-the-art of the industry. Proposed solutions to achieve this included a refocus of curriculum on classic art, music, film, and literature as well as a more drastic approach of not teaching the tools at all. The latter takes a trial by fire approach: force the students to learn tools on their own time or in the course of doing a project; the idea being that this will weed out those who cannot learn on their feet under pressure (a trait desired by the industry).

For the past few years, the game industry has been making a conscious effort to become more inclusive. From walking around halls and the expo floor, it's the closest I have seen to a 1:1 male-female ratio at any tech-centered conference I have attended. This was my third Game Developers Conference in seven years and the difference was noticeable. From the talks in the Education Summit it is clear there is momentum building to bring the game industry into a better gender balance.