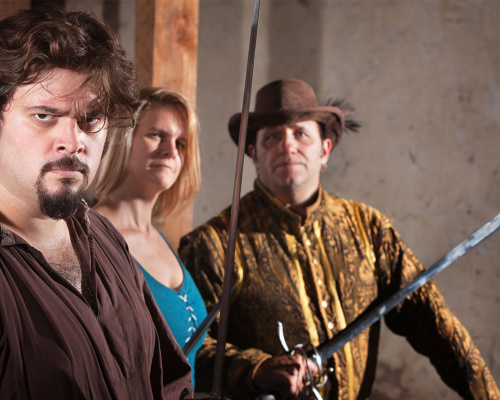 In September 2009, Lee Sheldon, a video game writer and designer-turned-college-professor at Indiana University, decided to try something different with his game design course. In Sheldon’s class, students needed to earn “experience points” to build their “score” up from zero towards a passing grade. The system mirrored video game scoring, where players start at zero and “level up” by completing missions, collecting coins, etc. But, using an alternate grading system is just one piece of the complete transformation of Sheldon’s course from a traditional model to a class delivered as a game.

The professor was the Game Master, students became players organized into guilds, and assignments were presented as quests to complete. An engaging narrative tied the quests together, culminating in a final exam that took the form of a tension-filled interrogation experience for the students.

Sheldon modeled his re-conception of the traditional class experience on a complex live-action game format known as an Alternate Reality Game (ARG). In a typical ARG, players work collaboratively to discover clues and solve puzzles scattered across both digital and physical environments. Early examples of ARGs were used to market movies, albums, video games, and other products.

In an article for EdSurge, English teacher Chris Aviles answered the question “Why Construct an ARG in the Classroom” this way:

“I started the ARGs with two goals in mind: get my kids to come to class, and make the ARG and related game-mechanics so fun and exciting that they will be more engaged and motivated around the material. Since starting my ARGs, as part of my gamified classroom, my students’ attendance has gone up almost 20 percent. In my bi-monthly surveys, my kids consistently report that they love coming to class and that the ARG makes them pay more attention, because they don’t want to miss a clue. Since engaged students learn, overall averages have gone up around five points, and have increased more dramatically with minority and male students who benefit from the ARG and a gamified classroom the most.”

Aviles admits that ARGs are hard work to set up, but the results are worth the effort. He believes that “placing an interactive narrative overtop of student learning will be a game changer in schools.”

ARGs are just one example of a broader category of game-based learning called “transmedia storytelling.” An exemplar of this genre, with its mash-up of digital narrative, movie, and gaming elements, is a ‘born-digital novel’ called Inanimate Alice. The narrative of Inanimate Alice centers around a young girl named Alice who aspires to be a game designer when she grows up. By playing the games Alice creates, students develop multimodal literacy and problem solving skills, as well as cultural diversity and awareness, social-emotional skills, and spatial visualization skills.

Below are several helpful links to learn more about ARGs and how to use them in teaching.

How Games Can Be Used To Teach College-Level Chinese Courses

Down the Rabbit Hole: How To Turn Your Class into an Alternate Reality Game

Alternate Reality Games: The Work Behind the Play

Secret Agent Students: How to Bring an Alternate Reality Game to Your Classroom