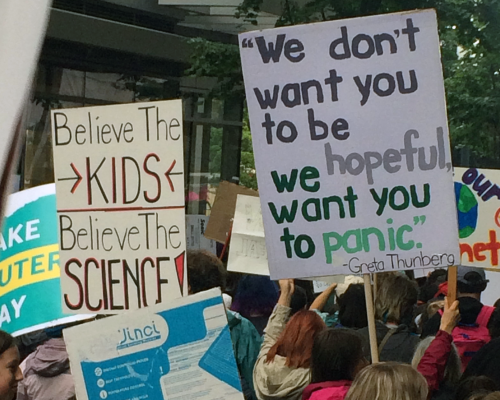 Last week, my family and I joined the four million people striking for the climate in communities around the globe. As I marched across Portland’s Hawthorne Bridge, I found myself swimming in a sea of youth, waving home-made cardboard signs and chanting in unison. Yes, there were adults, but this march was clearly led by kids.

Something about the power of large gatherings causes introspection. On the one hand, I felt ashamed of my generation’s inadequate and unacceptable response to the existential crisis of human-caused climate change. I also felt guilt about my own personal footprint on the earth, including more than my share of plane flights and a meat-heavy diet. But on the other hand, the energy of the youth gave me some hope about the future.

In education, we talk a lot about empowering children: to make their own choices about their education; to acquire the skills they’ll need for the careers of the future; and through technology-enhanced learning experiences. But underneath all of this jargon, adults remain in charge: providing the resources and creating the learning environments.

Maybe it’s time for adults to step back and let the children lead.

About halfway across the bridge, I found myself behind a girl—probably elementary school-aged—hidden underneath her hood. During a quiet moment, the girl (in a high-pitched, yet clear voice) said, “What do we want?” The crowd all around this little girl roared, “Climate justice!”

Given this positive response, the girl continued leading the chant, each time her call seemingly stronger than the last. In that moment, this girl found that she had a voice, and found that her voice mattered. To me, that’s true empowerment, more real than anything our educational system could strategically plan and deliver.

Riding the bus home amidst more crowds of boisterous students, I felt more positive about our ability to address climate change than I have in a long time. Right now, the children are the adults in the room. And instead of feeling impotence, we feel relief! Hopefully, we can heed their urgent calls and harness their energy to start making meaningful change before it’s too late.