Who says elementary math is only for elementary math students? In July, math leaders from schools that use Math Learning Center’s Bridges in Mathematics gathered to not only explore best practices, but also to explore and be inspired by math.

Over the course of the two-day Leadership Institute, participants discussed topics ranging from intentional student talk to computational fluency to modeling with mathematics. In each session, participants were pushed to “do math,” before considering how they could translate their experiences into more productive math classrooms in their districts. One session from Curriculum Specialist, Karen Prigodich, was particularly interesting to me because it addressed a topic that had continually vexed me as a classroom teacher: working with highly capable math students.

In the classroom, I felt like I was in ongoing negotiations with the “high fliers” and their parents. Just because a student can quickly solve a math problem doesn’t necessarily mean they should jump to the next topic. Instead of being shuttled to a higher grade level or asked to solve more math problems, highly capable math students can be asked to engage with mathematics at a deeper level.

After sharing strategies for extending students’ work within the context of grade-level problems, Prigodich asked conference participants to explore models and strategies that could be used to solve Callie’s Cake Pops , a fourth grade problem from the Bridges curriculum:

Callie is trying to earn money to purchase a new pair of soccer cleats. She has decided to make her famous cake pops and sell them to her friends.

Callie’s mom is willing to loan her the money to get the fundraiser started. Callie knows that her cake pops cost $1.25 to make, and she’d like to make 36 of them. How much money does Callie need to borrow from her mom?

Now, due to the way I was taught math, my first thought was to throw the numbers into the standard algorithm and calculate: 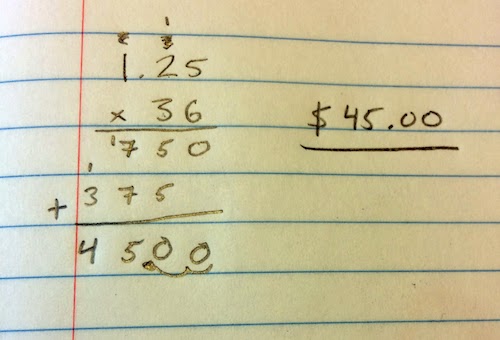 While this method might be effective in getting the right answer, it isn’t efficient or elegant. In no way does it demonstrate that I actually understand the underlying numbers or operations.

Instead of rushing to find an answer with a route algorithm, visual mathematical models can deepen the math behind the problem. The Math Learning Center Apps provide a versatile, open-ended ecosystem for modeling most elementary math topics.

Using the Money Pieces app , the dollars and the cents can be split to demonstrate a strategy for mentally solving the problem. 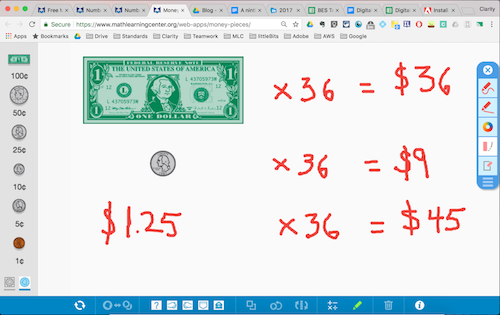 The Number Line app can be used to visualize that four cake pops will require Callie to borrow five dollars, a whole number that is much easier to work with than $1.25. 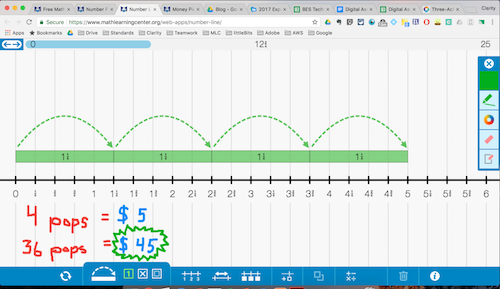 The problem can also be represented as an array with the Number Pieces app to showcase a true understanding of multiplication: 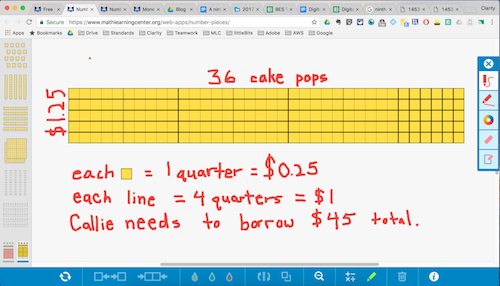 Even in the presence of digital tools, no one should discount the everlasting value of paper and pencil. One conference participant elegantly solved the problem with a ratio table:

After about 30 minutes, Prigodich had to stop the activity to move on with her presentation, but the exploration and discussion could have kept going. And we hadn’t even started working with the second half of the proposed standard about creating “new mathematical questions of interest to investigate.”

If a single fourth grade math problem productively engaged a room full of adults for 30 minutes, it should surely be able to engage the vast majority of our highly capable math students. By valuing multiple models over single algorithms, quality of explanations over number of problems solved, and elegance over speed, we can enrich the mathematical understandings of all of our students, within the context of grade-level math curriculum.