Do you remember your first computer programming lesson? Did you make the computer print out the message “Hello world” in plain text on a black screen? Well, fledgling programmers can have a far more action-packed first taste of coding with help from a spherical droid named BB-8.

For my hour of code, I get to build a Star Wars game, starting with blocks and then switching over to Javascript. Blocks are great for new learners of code for several reasons. You can drag and drop blocks, which makes things easier, and the blocks also prevent typing errors that can make coding so frustrating.

So, I have an hour to solve 15 puzzles using basic programming skills. I solved Puzzle 1 in seconds, and was rewarded with cute droid-talk from BB-8 as he carried out my commands to move right twice. That’s right! During the activity, a virtual BB-8 from the soon-to-be-released Star Wars sequel moves around in a virtual environment. Here, the character and environment are two-dimensional, which isn’t the most exciting graphics. But what it lacks in graphics it makes up for in sounds. During the puzzles, Star Wars music plays in the background, heightening the intensity and making the experience more immersive. 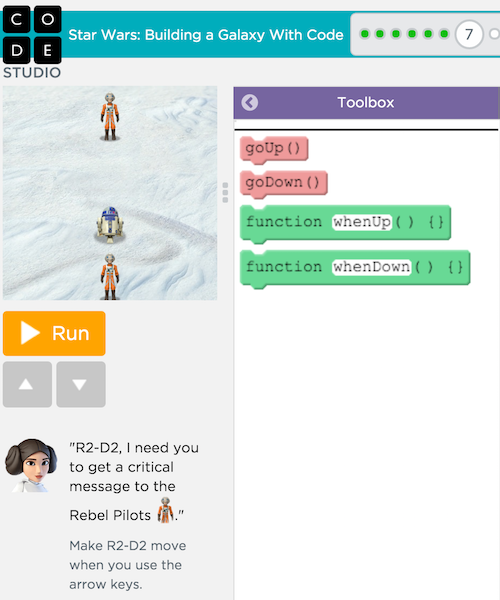 After four puzzles using blocks, a video introduces Javascript, because, in the second set of puzzles, you can choose either to drag blocks, or type the code.  I think this is a brilliant idea for new learners of code.  (This is also the first time I have seen a programming environment that allows for either blocks OR typing.)

A few more puzzles in, and I’m finished programmed BB8. Now, I get to build my own game, starring R2D2 and C3PO! Programming games introduces "events" - instead of simply watching a droid move, I can control its movements by pressing either an up or down arrow key. This interactive experience has much more appeal than the earlier puzzles. Again, when I run the code, I get sound effects that make the experience enjoyable.

At the end of 15 puzzles, and less than an hour of instruction, I’m turned loose to make my own game using the sounds and characters from the Star Wars universe.

I believe experiences like this one give students, especially very young students, a satisfying and welcoming experience of computer programming. There are so many diverse applications of coding now, it’s great to see that kids can learn the skills in contexts that better match today’s opportunities.

From STEM to stern, Jess Sanders is a teacher: eager and adept at communicating the complex in ways that not only help an audience to understand, but to truly—deeply—learn. As an Instructional Designer Jess contributes to a wide variety of projects: translating pedagogical research and practice into instructional curriculum specifically crafted to produce desired learning outcomes.